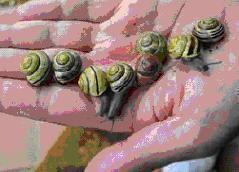 Why a megalab?A megalab enables large numbers of people to contribute simple observations made at theirindividual locations to a geographical survey in order to investigate a scientific hypothesis. It offersthe general public, including families and school children, the opportunity to do real science and toexperience the excitement of discovery for themselves. The Open University has been involved inmegalabs since the

Why a megalab?
A megalab enables large numbers of people to contribute simple observations made at their
individual locations to a geographical survey in order to investigate a scientific hypothesis. It offers
the general public, including families and school children, the opportunity to do real science and to
experience the excitement of discovery for themselves. The Open University has been involved in
megalabs since the 1970s. The results of a survey by Science Foundation Course students of
polymorphism in peppered moth were even the basis of a primary research paper published in the
journal Science in 1986 (Cook, Mani & Varley; Science 231:611-613). Megalabs of various kinds
have become a regular feature of BBC programming, most recently in the highly successful
Springwatch.

Why Cepaea?
The banded snails, Cepaea nemoralis and C. hortensis, occur through
many parts of the UK and continental Europe and in most populations
display easily seen polymorphism in shell colour and banding. The
genetic basis of this variation is quite well established. In the 1930s
Cepaea polymorphism was often quoted as a classic example of nonadaptive
variation. Then, work by A.J.Cain and many others showed
that in some places shell polymorphism was subject to natural selection
involving predation by birds and that different morphs were adaptively camouflaged against
different backgrounds. We now also know that there are correlations with temperature and latitude
that indicate that snail behaviour and shell morph are also locally adapted to climate, together with
many patterns of geographic variation which have not yet successfully been explained in terms of
natural selection. During this work an unprecedented amount of information on the genetics of
British Cepaea populations has been accumulated, with many thousands of samples taken from
most parts of the British Isles, collected over almost a century.

Evolution of shell polymorphism over the last 50 years can be expected because the two principal
known selective agents, predation by thrushes and environmental temperature, have both changed
over the period. Thrushes are much scarcer now and our climate has become warmer. These events
provide us with a scientific rationale for re-surveying Cepaea polymorphism in 2009. The link to
declining bird populations and to climate change will help motivate the general public to participate
and also illustrate the on-going nature of natural selection.

The Evolution Megalab in the UK
The Royal Society is supporting the Evolution Megalab by funding the digital capture of published
and unpublished historical data on the estimated 7,500 populations of Cepaea in which
polymorphism has been recorded over the last 80 years. Analysis of these data by leading
geneticists Dr Laurence Cook, Dr Robert Cameron & Prof. Steve Jones will provide the scientific
underpinning and historical context for the Megalab which will be run by the Open University in
2009. In that year the public will be invited to look for banded snails in gardens and public open
spaces across Britain and to report the numbers of different types (morphs) they find using mobile
phones and the internet. Maps will be produced and compared with the historical data. All
participants will receive automated, personalized interpretations of their observations. The megalab
will be publicised in the press, on BBC 2 in a series called Darwin’s Garden and in other media.
Participants will be able to follow-up an interest in evolution via a website and a short course on
evolution that will be specially produced by the Open University. We also hope to provide
resources for schools and for use by children of all ages.

Extension of the Evolution Megalab to continental Europe
Cepaea nemoralis and C. hortensis are found throughout W.Europe, extending Northwards into
Scandinavia and as far East as Russia. The polymorphism has been studied by local scientists in the
Netherlands, France, Spain, Germany, Italy, Poland, Denmark, Norway, Sweden, Ireland and
Iceland. Subject to funding being found, the software being created for the UK Megalab will be
versioned to provide a Europe-wide megalab that will be run collaboratively with institutions
elsewhere in Europe.
If you represent an organization that would like to participate in any aspect of the Evolution
Megalab, please contact Prof. Jonathan Silvertown: j.silvertown@open.ac.uk