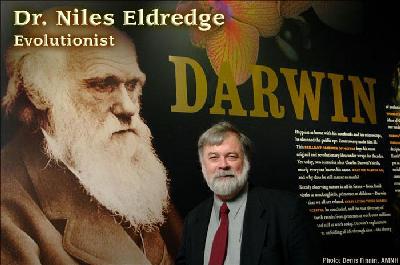 Hierarchy Theory of Evolution: a new theory of evolution by Niles Eldredge and Telmo Pievani

The Darwin Blogs – November 16, 2006.
Some News; A Guest Blog; Mr. Darwin Checks Back in-and Plans are Made

First, some news:
Great to be back home after a very stimulating and successful two-week trip to Italy. While there, I attended two conferences (one on each coast of northern Italy!), and met with friends in Milano.

The 32nd Piu Manzù Conference was held in the Grand Hotel in Rimini. (Frederico Fellini was born there-and the Grand Hotel was the inspiration for his movie Amaricord). The Piu Manzù Conference is under the general direction of Gerardo Filiberto Dasi, Giandomenico Picco, and Mikhail Gorbachev. Each year the Conference focuses on a specific world problem; this year it was the biodiversity crisis-or the so-called "Sixth Extinction." Named "La Vita in Bilico" (not coincidentally the same name as the Italian edition of my book "Life in the Balance") the Conferencegathered together an impressive array of scientists, physicians, economists, sociologists and politicians who brought their considerable and diverse expertise to bear on the environmental and human global problems confronting all life on earth right now. It was an inspiring event!

The two-hour Sunday session was televised live nationally by Italian television RAI. I was doubly honored to be the recipient of the Medal of the Italian Senate as well as the Gold Medal of the Piu Manzù Conference. My profound thanks to the organizers of this important Conference!

Then it was off to Milano-where I visited my friends Ilaria Vinassa and Giorgio Teruzzi at the Natural History Museum in Milan. I was happy to do a newspaper interview, explaining both my admiration for the excellent dioramas at the Museum-and my plans for the forthcoming meeting of our new group on Evolutionary Hierarchy Theory about to convene at the Festival della Scienza in Genoa a few days later.

My wife Michelle and I then met with the amazing performance artist/musician/urban designer Massimo Giuntoli. We spent a delightful day at Como-ending up at our favorite restaurant in the world, Tullia Angelotti's wonderful "Tagiura" back in Milan. Massimo has a vision: he has designed a multi-story glass-with-steel-frame building in the shape of a giant tortoise! Dedicated to science in general, and to Charles Darwin in particular, the Giant Tortoise will have exhibition and theater space in which to celebrate and promulgate evolution and other scientific themes. I am hoping that Massimo will succeed in having these Tortoise Buildings constructed in many cities around the world.

Then it was off to Genoa. The Genoa Festival della Scienza, only in its fourth year, has already grown to be the largest such festival of its kind in Europe-which effectively means in the entire world! (Only the festival in Edinburgh rivals the Science Festival in Genoa in size). Several hundreds of thousands of people attended this event in a ten day period this year.

With Telmo Pievani - one of the principal organizers of the Festival - I organized a new Research Group on the subject of Hierarchy Theory in Evolution. Telmo is a rising star in Italy-one of Italy's youngest tenured professors. He is a philosopher of science-specifically of evolutionary biology. My thanks to Telmo and to the head of the festival, publisher Vittorio Bo (whose firm Codice has published several of my books-including the Italian translation of Darwin. Discovering the Tree of Life) for making our meeting in Genoa possible-and so successful!

Hierarchy theory recognizes the many levels of biological organization. In a nutshell, genes are parts of genomes; genomes the genetic wholes that are in turn parts of organisms; organisms are parts of breeding populations ("demes"); demes in turn are parts of species; and species are individual components of ancestral-descendant sequences that make up the array of genera, families, orders, classes and phyla of the Linnaean hierarchy.

This is the so-called "evolutionary" (or "genealogical") hierarchy. Each component replicates-or, more loosely, "makes more of itself:" genes replicate; organisms reproduce; species speciate.

On the other hand, organisms have a distinctly economic side to their existence: they process matter and energy to develop (as embryos, for example), grow-and simply to continue to exist. This side of life finds organisms of the same species forming local populations that are in turn parts of local ecosystems; local ecosystems are connected with neighboring systems, as matter and energy flow across the often very loose boundaries between local ecosystems. And so forth: the biota of the entire world ("biosphere") is hooked up into a vast network of matter-energy flow. This is the "ecological" (or "economic") hierarchy.

Darwin's concept of natural selection boils down to the principle that how well an organism does in the economic side of its life is bound to have an effect on how well it will do in the reproducing side of its life. Hierarchy theory has the potential of integrating all aspects of evolutionary biology (perhaps all of biology in general) by explicitly recognizing the existence of each level in both hierarchies; understanding that there are distinct processes (or analogous processes operating at different scale of space and time) at each level (hence each level can be studied independently and in its own right-the way biology has historically been carved up into distinct, separate subdisciplines); and by analyzing the ways in which the different levels-within and between the "economic" and "genealogical" hierarchies-interact with one another.

In the 1980s, hierarchy theory showed promise as the way to develop a more complete evolutionary theory-and as a way to organize and better understand the complexity of biological systems. The approach has lain semi-dormant for over a decade, and our group has decided to see where things stand as of now-and how the entire field of hierarchy theory can be amplified and extended in evolutionary biology. We convened a research group consisting of T. Ryan Gregory (University of Guelph, Canada); Ryan studies genome size-and several years ago showed that the genome itself is hierarchically structured! Bruce Lieberman (University of Kansas) is a paleontologist who has made important contributions to our thinking about the importance of geography and the physical environment in understanding macroevolution. Ilya Temkin (NYU/American Museum) has brought molecular biology, anatomy and paleontology to bear on his understanding of the evolution of pearl oysters; Ilya has important new ideas about how networks relate to hierarchical structures. William Miller III is a paleontologist whose contributions to understanding large-scale ecological structures are unique-and very influential (absolutely essential to the development of my own thinking!). Telmo Pievani, as mentioned, is a philosopher of science (at University of Milano II); Telmo is an extremely sophisticated thinker who is able to interweave the group's disparate thoughts under the rubric of hierarchy theory. Dan Brooks (University of Toronto) is, along with me, the grizzled veteran of the group. A parisitologist, Dan has been at the forefront of all interesting theoretical discussions in systematics and large-scale evolutionary theory for his entire career; for example, with E.O. Wiley, Dan pioneered thinking about evolution in terms of thermodynamics-a subject which itself cries out for more attention. And me-whose work has been amply featured on these pages already.

We made plans and pushed the hierarchy envelope. But we also put on a 3 hour program for the public at the amazing Palazzo Ducale. With an audience of 500 people, we put on quite a show! Everything from molecules to ecosystems! Stay tuned for further announcements: this hierarchy group of ours is going places! My thanks again to Vittorio Bo, Telmo Pievani and the entire staff (and supporters!) of this extremely important annual event: The Festival of Science in Genoa!