Effects of Climate Change on Birds 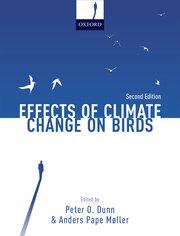 Effects of Climate Change on Birds

Climate change issues are attracting rapidly increasing interest from a wide range of biologists due to their unprecedented effects on global biodiversity, although there remains a lack of general knowledge as to the environmental consequences of such rapid change. Compared with any other class of animals, birds provide more long-term data and extensive time series, a more geographically and taxonomically diverse source of information, a richer source of data on a greater range of topics dealing with the effects of climate change, and a longer tradition of extensive research. The first edition of the book was widely cited and this new edition continues to provide an exhaustive and up-to-date synthesis of our rapidly expanding level of knowledge as it relates to birds, highlighting new methods and areas for future research.

Peter Dunn is an avian ecologist and geneticist at the University of Wisconsin-Milwaukee. He obtained his PhD in 1989 at the University of Alberta where he studied the mating behaviour and ecology of tree swallows. Throughout his career, Dr. Dunn has been interested in the effects of food abundance on reproductive success and mating behavior. In 1997, after reading about the effects of climate change on birds in England, Dr.Dunn initiated the first large-scale study of the effects of climate warming on birds in North America, and he is currently examining the effects of warming on long-term trends in insect abundance.

Anders Pape Møller obtained a PhD in zoology at Aarhus University, Denmark in 1985, on social behaviour in barn swallows. Dr. Møller has broad research interests in ecology, radioecology, evolution, genetics and global change biology. He has conducted more than ten long-term studies of birds, insects and other organisms since the late 1970’s.