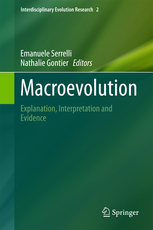 This book is divided in two parts, the first of which shows how, beyond paleontology and systematics, macroevolutionary theories apply key insights from ecology and biogeography, developmental biology, biophysics, molecular phylogenetics and even the sociocultural sciences to explain evolution in deep time. In the second part, the phenomenon of macroevolution is examined with the help of real life-history case studies on the evolution of eukaryotic sex, the formation of anatomical form and body-plans, extinction and speciation events of marine invertebrates, hominin evolution and species conservation ethics.
The book brings together leading experts, who explain pivotal concepts such as Punctuated Equilibria, Stasis, Developmental Constraints, Adaptive Radiations, Habitat Tracking, Turnovers, (Mass) Extinctions, Species Sorting, Major Transitions, Trends and Hierarchies – key premises that allow macroevolutionary epistemic frameworks to transcend microevolutionary theories that focus on genetic variation, selection, migration and fitness.
Along the way, the contributing authors review ongoing debates and current scientific challenges; detail new and fascinating scientific tools and techniques that allow us to cross the classic borders between disciplines; demonstrate how their theories make it possible to extend the Modern Synthesis; present guidelines on how the macroevolutionary field could be further developed; and provide a rich view of just how it was that life evolved across time and space. In short, this book is a must-read for active scholars and because the technical aspects are fully explained, it is also accessible for non-specialists.
Understanding evolution requires a solid grasp of above-population phenomena. Species are real biological individuals and abiotic factors impact the future course of evolution. Beyond observation, when the explanation of macroevolution is the goal, we need both evidence and theory that enable us to explain and interpret how life evolves at the grand scale.

Nathalie Gontier is a philosopher of science and an anthropologist. Her main research interests lie in evolutionary epistemology and non-Darwinian evolutionary theories, how the latter differ from the Modern Synthesis and how they can be implemented into the linguistic sciences and the overall sociocultural domain. As the founding director of the Lisbon Applied Evolutionary Epistemology Lab, she is affiliated to the Centre for Philosophy of Science at the Faculty of Science of the University of Lisbon, and financed by the Portuguese Fund for Science and Technology. Previous appointments were held at the Dutch Free University of Brussels (Belgium), the Konrad Lorenz Institute (Austria), and the American Museum of Natural History (USA). Her research has been sponsored by the American John Templeton Foundation, the European Marie Curie Actions and the Belgian Fund for Scientific Research Flanders. She is the founder and editor-in-chief of the Springer book series Interdisciplinary Evolution Research.

Emanuele Serrelli is a philosopher of science interested in interdisciplinarity within and across the natural and social sciences. He works with several Italian universities. He was visiting scholar at the University of Utah, and visiting fellow at the Sydney Centre for the Foundations of Science, the Lisbon Applied Evolutionary Epistemology Lab, and the NESCent – National Center for Evolutionary Synthesis, Durham, NC. As a member of the scientific board of CISEPS – Center for Interdisciplinary Studies in Economics, Psychology and Social Sciences, he leads the “Cultural Evolution” research programme at University of Milano Bicocca. As a philosopher of biology, he is trained in evolutionary theory, a field in which he also studies interdisciplinarity and modeling.