Organisms from Molecules to the Environment. Nuovo fascicolo di BioScience, 2007 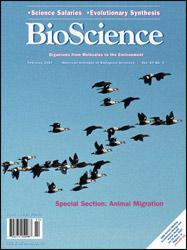 Dall’editoriale, gentilmente concesso dall’editore, riporto:Animal migration fascinated the ancients and continues to fascinate researchers today. An often highly complex, synchronized suite of changes in behavior,morphology, and physiology enables journeys that may be epic in scale. These feats of endurance and navigation,which often beggar belief, are widely—and correctly—regarded as some of the most astonishing of nature’s spectacles.Researchers have gained some important

Dall’editoriale, gentilmente concesso dall’editore, riporto:
Animal migration fascinated the ancients and continues to fascinate researchers today. An often highly complex, synchronized suite of changes in behavior,morphology, and physiology enables journeys that may be epic in scale. These feats of endurance and navigation,which often beggar belief, are widely—and correctly—regarded as some of the most astonishing of nature’s spectacles.Researchers have gained some important insights into the evolution of migration, yet very much remains unknown about the multiple mechanisms that animals call on when they migrate.
These facts are reason enough to devote much of this issue of BioScience to a special section on animal migration.But there are at least three additional reasons.One is that as new capabilities resulting from the revolution in molecular biology diffuse outward, phenomena such as migration are becoming increasingly susceptible to
analysis in genetic and even molecular terms. A second is recent advances in tracking technologies, ranging from isotope analysis for identifying locations an animal has visited to miniaturization of transmitters and receivers.

Another reason for a special section on migration is perhaps more urgent. Global warming is changing the timing of bud bursts and myriad other cyclical processes thatprovide food for wildlife, and driving many birds and insects to move their ranges. In some birds, warming may favor shorter migration distances, but the complexity of migration is such that trying to predict the consequences for species in general borders on the impossible. Yet try we must, because only by obtaining a clearer picture of how migration really works will we be able to plan strategies for mitigating the effects of warming.

BioScience’s special section on animal migration was coordinated by Hugh Dingle and V. Alistair Drake. They have brought together a distinguished group of authors.

Dingle and Drake (p. 113) provide the broadest generalizations about the nature of migration, which can be seen as an adaptation to fluctuating resources.

Åkesson and Hedenström (p. 123) describe experimental approaches to the question of how migrants achieve their navigations, and suggest that future research will need to investigate a range of natural cues.

Ramenofsky and Wingfield (p. 135) describe morphological and physiological adaptations involved in seasonal migrations. They note that the control mechanisms that regulate migration and coordinate it with local conditions are largely unknown, and that the potential for disruption by climate change is great.

Cheke and Tratalos discuss some of the complexities of migration for two pest species (red-billed queleas and desert locusts) in the article that begins on p. 145: They argue that predicting the details of future ecological changes will call for greater understanding of the population dynamics and genetic composition of many organisms.

Roff and Fairbairn (p. 155) describe the genetic architecture of several components of the migratory syndrome in the sand cricket, Gryllus firmus.

And Pulido, in the article that starts on p. 165, shows how genetic correlations among migratory traits and with other traits are likely to play a major role in determining evolutionary change. The section thus provides a valuable survey of expert views on a range of aspects of this pervasive and vital syndrome.