The history of thought on biological evolution 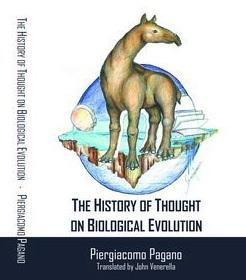 The history of thought on biological evolution: with reflections of environmental philosophy
Piergiacomo Pagano

This book examines the history of biological thought from the ancient philosophers up to the present day. The intended audience is students of a high school/university level; nonetheless the narration, following the line of logic that has accompanied thinkers of the past, will permit even less prepared readers to gradually acquire the elements necessary for complete understanding of the text. In other terms, the book is written with the rigor necessary for the academic world, but its narrative manner makes it suitable also for a very broad public. This book is recommended for many other people and reasons. – From the scientific point of view, correct placement of current research within a historical reference will help new points of reflection to emerge that will help to better direct and modulate future research. – From the philosophical and social points of view, the historical treatment allows an analysis of the logical and rational development of the debate on evolution through the course of the centuries, demonstrating the differences between scientific theory and pure speculation. – From the point of view of environmental philosophy, the theory of evolution describes objectively the place of mankind in Nature and therefore allows the enunciation of a deontological ethics when addressing the urgent issues of sustainable development, whether from an environmental, economic, or social point of view. Moreover, nowadays evolutionary biology have to deal with a dangerous new creationism that starts from a perspective called Intelligent Design (ID). In the Journal “Nature” (2008) a paper entitled: «Creationists launch “science” journal: research within a biblical framework to be peer reviewed» gives a perfect example of the power of their lobby. It is clear that biology and biologists have to respond to these hypocrisies. But, scientists in general, and biologists in particular, are reserved and focused on their studies; they are not accustomed to expatiating like politicians, preaching like clergymen, or debating like lawyers. They are accustomed, rather, to making conscientious affirmations, pursuing meticulous investigations, and engaging in exchanges of opinions with other experts. Now, instead, and without having a specific preparation in communications, time to lose, or desire to go into issues that are poor from a cultural point of view, modern-day biologists are called upon to face those deft swindlers who would pass off as equally worthy of attention the neo-Darwinian theory and those (nonscientific) ideas of new creationism. Because the proponents of ID use very effective tools and techniques in gripping the attention of everyday people (the same people who, in the end, are decisive in political choices), biologists have three choices: 1) act as though nothing out of the ordinary were occurring; 2) respond with precision, and with clear conscience, but at risk of misunderstanding; 3) respond with means that are not scientific at all, thus failing to live up to one’s own ethics. How should they behave? The first possibility would be the preferable, in view of the sterility of the debate, but no one wins anything by giving up. Regarding the other two possibilities, certain scientists propose a more flexible approach, aware that debate is, in any case, a wealth. Others think it is right to fight back with vigor and determination, contemptuously almost, to the arrogant claims of the ID proponents, making use of the same tones they do. Almost inevitably, when you read certain statements from the most uncompromising new creationists, the desire to respond in kind (and therefore with contempt) doubtless arises. There is, moreover, another way. It is the historical approach that could explain with simplicity how scholars of antiquity, in searching the truth, arrived at the conclusion that the evolutionary neo-Darwinian theory is solid and coherent. This is the way of this book.